I drove through Amador County Monday en route to my family holiday, and somewhat out of character for me, stopped to taste some wines.
I had just enough time to visit two sites, Deaver Vineyards and Vino Noceto, both in the vicinity of Shenandoah School Road.
Deaver’s facility was gorgeous, and its tasting menu lengthy. I liked the carignane and one of the zinfandels, a blend of 10 different clones.
My second stop was Vino Noceto, another family-run vineyard, one that specializes in sangiovese and zinfandel. The winemaker also produces barbara, but the latest vintage has yet to be released, and apparently is so small it’s allocated mostly to club members and those who happen to be at the right place at the right time. I very much enjoyed both sangioveses, and a zinfandel made from reportedly some of the oldest vines in the United States.
While my visit there this week was limited in terms of what I could taste, 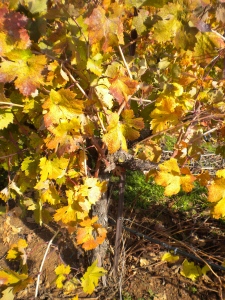 I will absolutely return when I have more time.
The soils of Amador County are iron rich and full of sandy clam loam, which makes them able to retain more of the region’s limited rainfall. These conditions, naturally, make an area ideal for the cultivation of high-quality wine grapes.
The first vineyards in Amador County were planted around 1849 after the start of the Gold Rush. Today, many of those old zinfandel vines still grow earthy, spicy wine and represent the region’s best known varietal.
Other grape varietals the region showcases are the Italian varietal barbera, and syrah, as well as sangiovese, petite syrah, sauvignon blanc and viognier.
Vineyards now represent approximately 50 percent of the region’s agriculture.

Although technically it’s not part of Santa Barbara’s so-called Urban Wine Trail, the newly relocated winery and tasting room of Sanguis Wine is definitely one of the coastal city’s urban delights.
Matthias Pippig, winemaker and co-owner with his wife, Jamie Kinser, and their assistant winemaker, Jessica Gasca, moved the winery from a Happy Canyon facility shared with Grassini Family Vineyards & Winery to Santa Barbara mid-summer.
The current harvest is their first in the new digs on Ashley Avenue, a tiny cul-de-sac west of Milpas Avenue. The building formerly housed an architectural firm, and Pippig said that he ended up hiring its staff to assist with remodeling the space into a winery.
While the structure isn’t as large as what he hoped to find, Pippig said, it “feels right, and that feeling supersedes space requirements.” It houses offices, a tasting room, barrel room, a production facility sizable enough to house a press, and a back patio with “lots of natural light, perfect for harvest work.”
During our interview in early August, workers were excavating and leveling earth for a now-completed driveway that runs the length of the building, and the cement dried just in time for Sanguis Wines’ industry party the following week. Trucks carrying grapes harvested for Pippig have just enough space to motor down the narrow drive and turn around behind the winery.
While the winery-tasting room appears utilitarian from the street, inside it’s anything but. Visitors enter the building via the sparse but cozy tasting space, complete with table and chairs, with the winery itself at the rear. The “wall” dividing Sanguis’ barrel room from the winery is actually floor-to-ceiling panels made of acrylic and aluminum that glide open and shut. 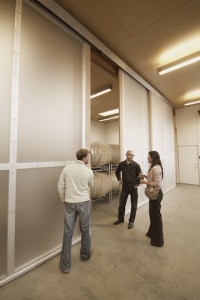 I’ve been a fan for some time of Santa Maria’s Central City Market, but on Aug. 9 attended my first winemaker dinner there with the family of owners and winemaker for Presqu’ile (“Press-KEEL”) Winery, also located in Santa Maria. Starting with the appetizers, served with Champagne and Presqu’ile’s limited syrah vintage, and progressing to the four courses and dessert, the entire evening was exquisite. If you’ve met Cronje, you already know that his enthusiasm for the Central Coast and making wine is contagious, and he isn’t shy about sharing his opinions about wine styles in general.

On a warm weekend in mid-August, many of those who make wine from vineyards in Santa Barbara County’s celebrated Santa Rita Hills gathered to honor the region during the Wine & Fire event marking the 10-year anniversary of the AVA.
Wine tasting events led off the three-day Wine & Fire Friday night at both Avant Tapas and Wine in Buellton and D’Vine Wine Bar in Lompoc.
Both events drew large crowds — Avant’s staff ran low on glasses and wristbands and patrons had to shout to be heard over the din, and at D’Vine, proprietor Karen May said she turned down latecomers because space ran short.
The next morning at Alma Rosa Winery, all seats were full for Wine & Fire’s Saturday seminar billed as a look at the “past, present and future of the Sta. Rita Hills.”
Clos Pepe winemaker Wes Hagen welcomed participants by noting that 2011 is the 40th anniversary of the planting of the first vineyard in what is now the Sta. Rita Hills — the iconic Sanford & Benedict Vineyard.
So it was especially fitting that the pioneer of that vineyard and Sta. Rita Hills wine in general, Richard Sanford of Alma Rosa, was that morning honored for his work as “navigator” behind the evolution of the region’s viticulture.
“We’re something different,” Hagen noted. “We’re not the Santa Ynez Valley, and we’re not the Santa Maria Valley.” He urged those present to look east, then west, and feel the difference between the two directions. “The Pacific Ocean to the west fights with the summer heat to the east,” creating one of the most unique geological regions in California, he said.
Winemakers seated for the panel included Sanford; Ryan Carr, Carr Winery; Kathy Joseph, Fiddlehead Cellars; Bruno D’Alfonso, Badge, D’Alfonso and D’Alfonso-Curran wines; Rick Longoria, Longoria Wines; Morgan Clendenen, Cold Heaven Cellars; and Ryan Zotovich, Zotovich Cellars. Josh Raynolds of Steven Tanzer’s Wine Cellar moderated.
The details each panelist offered — ranging from the region’s history, soil structure, climate, wine grape varietals — provided attendees with an expert’s view of the “SRH.”
Carr, whose vineyard management company oversees several area sites, emphasized that the Sta. Rita Hills’ soils are a “unique” sandy loam — a mix of sand, silt and clay. That treasured soil structure, along with a cool climate, leads to the characteristics for which SRH wine is famous: “Great acidity, a ripeness on the mid-palate and a long finish,” he noted.