I’m late to the table with my tale of the Friday Field Dinner from Bacon & Barrels at Saaloos & Sons July 18.

Local chefs Jeff Olsson of Buellton’s Industrial Eats and Jake O. Francis, pig farmer at Valley Piggery, combined their culinary talents to craft a meal I’ll not soon forgot. I can still taste the fried trotters (feet, if you — like me — are new to pig parts) and the crispy pig head. 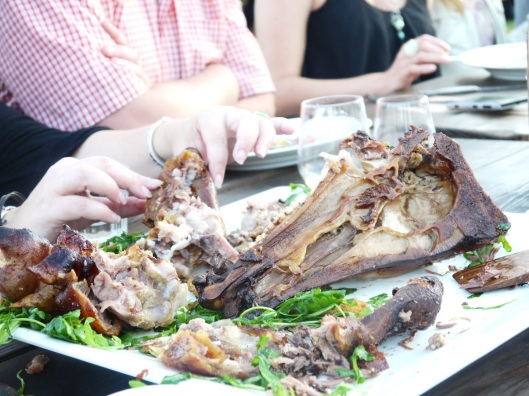 Yes, it was finger licking good, that pig and all the fixings.

The wines with the meal came from the hosting family, Saarloos & Sons. The event began with rosé, followed by sauvignon blanc, and then several red wines.

Here’s most of the menu (I left before dessert):

Yes, one can see why Rundown on LA named Bacon & Barrels “The Coachella of Bacon,” and The Huffington Post “One of the Top 5 Festivals in California.”

This Saarloos & Sons’ weekend event was the second for Los Olivos; Holly Holliday, queen bee behind organizer/owner Create Promotions of San Luis Obispo, worked her magic and debuted another B&B in San Diego last May.

Thanks to my day job, I missed both Saturday and Sunday’s version of more bacon and more wine, beer and spirits, but nearly everyone else I know attended some part of both weekend days, and came away smiling.

Saturday included more than 75 food and libation booths staffed by chefs who packed their most imaginative and freshest bacon recipes to pair with artisan and craft barrel beverages such as bourbon, wine, beer and scotch, according to Create.

Said Holliday: “I’m thrilled to once again host on the field and put out so many culinary and libation artists who all brought amazing offerings to the table, literally. It only further proves my claim that we have some of the best artists in the country right here in wine country.”

About Create: Founded in 2011, the company features a team of event specialists dedicated to events that are community supported and community focused. Besides Bacon and Barrels San Diego and Los Olivos, events include Buellton Brew Fest, Winter Wonder SLO, and BubblyFest. Visit http://www.createpromotions.com, or call (805) 709-2221.

Bacon & Barrels, named by the Huffington Post as “One of the Top Five Festivals in California,” returns with a Saturday festival and meals to Saarloos & Sons Field in Los Olivos.

Organizers predict that tickets for the event will once again sell out, so get on it! 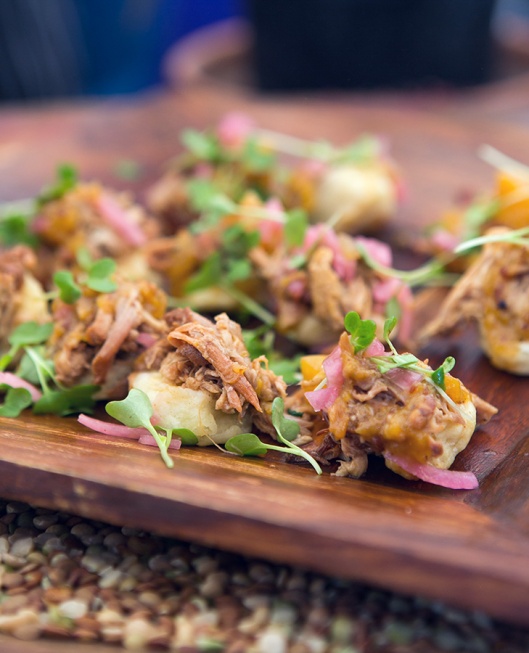 Bring a big appetite for the yumminess of All Things Bacon, for you will not be disappointed. The second annual festival will once again showcase local chefs’ bacon recipes, and highlight the best artisan barrel-based beverages: bourbon, beer, scotch and wine.

Bacon & Barrels debuted in Los Olivos in June 2013, and this year added a second location in May – San Diego. That event also garnered Holly Holliday’s Create Promotions more well-deserved fame — and another sell-out.

Friday: The weekend kicks off with an all-bacon dinner in the field to be prepared by Chef Jake O. Francis, pig farmer and farm-to-table master. The four-course dinner is viewable here http://www.baconandbarrels.com/schedule/

Sunday: The VIP experience continues with the “Bacon, Bellini and Bloodies Brunch, also in the field.

Bacon & Barrels Los Olivos will donate a percentage of ticket sales to support The Los Olivos School Foundation and the Los Olivos Business Organization. Bacon & Barrels will also incorporate its proprietary Environmental Event process, with a goal of 95 percent of all event trash to be diverted from the landfill.

True story: I fell hard for red wine in the early mid 1980s. The scoundrel: cabernet sauvignon. This hearty Bordeaux grape varietal is all I drank. For months. I’m quite sure I’d never even heard of pinot noir, much less syrah and its Rhone cousins.

This Joseph Blair cabernet sauvignon, the second label crafted by Mark Cargasacchi (Jalama Wines), takes me back almost 25 years to autumn days in a cooler, rain-laden climate, to suppers around a fireplace followed by light desserts of aged cheddar and dark chocolate.

A stand-up cabernet, the first from Mark Cargasacchi, and the second label to his Jalama Wines

This cab displays a ruddy ruby color and a fresh cherry and tobacco nose. It’s tight on the palate with mouth-watering tannins — yet wonderfully drinkable now. True to its heritage of red fruit, with a smack of herbs and spice. Very focused. I split a bottle over two nights and then pawed through my cellar for another before realizing I’d given away my second bottle to a friend. Damn.