And West, back to Lindley Wines

Starting Sept. 20, with the inaugural harvest at their estate vineyard, Frankie and Jake Lindley have been deep in grapes — but short on sleep.

For example, Monday: The two had another pinot noir pick, beginning at dawn. About 11 a.m., Jake Lindley left for an all-day industry event in San Diego; he napped in the backseat on the way home.

At 2 a.m. Tuesday he arrived back home — and went straight back to Lindley Vineyard for an overnight pick, scheduled under the cover of darkness because of the warm days and evenings this week.

About 10 a.m., Lindley reached the winery to de-stem that pinot, and at 2 p.m., he left for an eight-hour shift at Pali Wines, where he’s picked up some extra cellar work.

Welcome to 24 hours in the life of a winemaker during harvest.

Tuesday evening, when I phoned Frankie Lindley to arrange Wednesday’s interview, she vowed with a laugh that, starting this weekend, she would be “sleeping in until October.”

(In fact, mid-morning Wednesday she confided that the exhausted couple had overslept by one hour and were late to the vineyard).

With their estate pinot noir all picked by Tuesday morning, the Lindleys Wednesday morning turned their focus to the vineyard source for Lindley Wines’ prior two vintages of pinot noir: La Lomita Vineyard. This private, one-acre site is near Ampelos Vineyard on the eastern edge of the Sta. Rita Hills AVA. Since 2011, the Lindleys have shared that pinot noir with the owner. 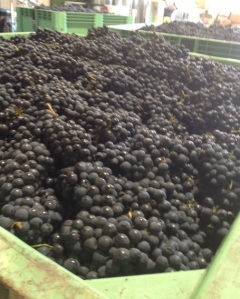 When I caught up with him mid-morning at the winery, Jake Lindley was unloading what weighed in as a record three tons of La Lomita pinot noir. “I’ve NEVER gotten more from this site!” he exclaimed.

The final Lindley Vineyard estate pick early Wednesday was the half-acre of chardonnay, and pick just under one ton (1,191 pounds) — about one-quarter ton over than Lindley’s initial estimate.

He’d borrowed three fermenter bins from his winemaking neighbor, Norm Yost of Flying Goat Cellars, and by Wednesday noon, all of Lindley Wines’ pinot noir was soaking away in 17 bins topped with pink and red sheets.

“When I get a spare minute, I’ll start inoculating the pinot, three bins at a time,” Lindley said. But first, there was that ton of chardonnay to press.

Coming in about two weeks: I’ll revisit fermentation, barreling and aging at both Dragonette Cellars and Lindley Wines, where the respective winemakers’ 2013 sauvignon blanc, grenache-mourvedre rosé, pinot noir and chardonnay will be under wraps.